"What is it? Just what is this "Exile" thing supposed to do?"
"It's what allows the Guild to have their authority. It's a power that has the ability to control all the world."
"So what do you plan on doing with something like that once you get a hold of it?"
"Destroy it with my own two hands."
―Claus Valca and Alex Row[src]

Alexander "Alex" Row is the 28 year old enigmatic captain of the infamous battleship Silvana. He is given the responsibility of protecting Alvis E. Hamilton from the Guild. He has an outwardly cold façade that seems unemotional, and harsh. He is a graduate of the Anatoray Military Academy, but he is loosely affiliated with Anatoray. Because he has his own agenda, he carries out the orders of the Anatoray Emperor, but eventually breaks all ties with Anatoray and Disith because of events not directly approached in the series. Due to this and the Silvana not being in the service of either nation, his ship's actions are directly his orders.

Alex displays astounding marksmanship several times during the series, most iconic is his first appearance before Claus and Lavie, where he flawlessly shot a Guild Starfish pilot directly in the head, killing him instantly. He is also a master strategist in many contexts, both inside and outside of warfare.

"I had trouble with him. I spent a lot of time, especially on the clothes. His face was designed quickly."
―Range Murata

Character designer Range Murata has described the character as a "loner." Alex was based on Captain Harlock, a space pirate character created by Manga artist Leiji Matsumoto. Originally, Alex was going to be the main character of Last Exile and the story would center around Alex's revenge. When that idea was scrapped, Murata had to change Alex's appearance: "At first, my imagination was that he was quiet and gloomy, so when his character changed I spent some time thinking about how his clothes should be."

The character of Harlock was taken as the basis for Alex Rowe.

Alex Rowe is a tall 28 year old man with tanned skin and a lean, elongated face with a tapering chin and a bold nose. He has wavy black chin-length hair and dresses in black pants and a black shirt, and black boots. He covers all of this clothing with a high-collared black cloak that can be buttoned up the front with dome-shaped buttons emblazoned with the sigil of the Silvana.

According to Range Murata, the design for his clothing "turned out all black, no matter how carefully or subtly I put in the lines; they were all the same when I colored it in." Animators also experienced difficulties in animating his hair and flowing cape.

Alex was not always as cold and emotionally distant as portrayed in the series. At the Anatoray Military Academy, he was a shy, quiet, and closed-off student. During his stay with Hamilcar Valca, he had a brotherly and affectionate relationship with the young Claus Valca.

It was not until the woman who he cared about most in the world, Euris Bassianus, and his two teachers, Hamilcar Valca and Georges Head, were taken away from him that he changed. Upon meeting the children of his mentors, Alex wanted to show them what the skies could be like. Although he could not say it, he wanted to deeply.

Sometimes Alex could be found with Recuise Dagobert in the Claudia Unit room or in Recuise's quarters playing chess. Depending on the location, the two would play on a portable mat with holes for the chess piece pegs or on a wooden chessboard. Alex seemed to enjoy the game very much, never turning down an opportunity to best the aged Guild genius.

Born in Guild Date 637, Alexander Row attended the Military Academy of Anatoray. There, he met Vincent Alzey and Sophia Forrester. Vincent, his roommate, would try to brighten the overly shy and silent Alex, often butting into Alex's private affairs. It was not long before Alex met Euris Bassianus, the daughter of Prime Minister Marius Bassianus. Alex proposed marriage and she accepted.

Sometime in Guild Date 654, Alex was tasked with flying to Disith with Hamilcar Valca, Georges Head, and Euris Bassianus with a peace treaty. Before leaving, Alex and Euris traveled to Norkia before leaving. He met Hamilcar's wife and son and Georges' daughter. Alex had in his possession a stuffed goat as a present to Lavie to help calm her fears.

Upon entering the Grand Stream, the two vanships were intercepted by the Maestro Delphine's Guild. Valca and Head's vanship was struck by the Guild Presence Ship Delphine commanded and fell out of control, killing the two men. Alex's vanship was also struck, releasing Euris from her safety harness and sending her out into the Grand Stream. Fleeing in terror, he caught a glimpse of Delphine: she stood at a window, her roses in hand, smiling. As he fled, he found the mythical Exile, lost for centuries.

His mentors and fiancée now dead, Alex flew to Norkia to give the sad news to Valca's wife, his son, and now the orphaned daughter of Head. As he left the estate of the grieving Justina, he left his vanship behind.

Bandaged and wounded, he returned to the Imperial Capital's Military Academy to study upper-level courses. The deaths and his feeling of helplessness led Alex to feel a firm hatred for the Guild's Maestro which grew into a cold hatred.

Three years later, Alex was appointed to serve aboard the Silvana.

Five year later, Alex reunited with his old roommate Vincent Alzey at the Battle of Otranto.

Alex, as captain of the Silvana, entered into combat during the Third Battle of Minagith against the Disith's Reparation class battleships. Sinking a number in the Grand Stream, he flew to Minagith and helped Duke David Mad-thane's retreat.

When news of the Duke's retreat reached the Imperial Capital, the Emperor ordered that Alvis should be transported immediately to the Silvana for fear of the Disith taking her. Ralf Wednesday, with Gita Rjuna as his navigator, were to take the Alvis to a group of ruins on the outskirts of Norkia. Alex would pick up the girl for safekeeping. Unfortunately, both Ralf and Gita died in their mission and instead the son of Hamilcar Valca and the daughter of Georges Head stood before Alex with Alvis: Claus Valca and Lavie Head.

Although Alex was given Alvis for safekeeping, he had his own plans. Upon leaving the ruins, he left for Walker Palace. Walker told Alex of a black market auction that would be happening at Horizon Cave. The last item up for auction would be the "Key to Exile," an object that would open the door to Exile. Learning this piece of information and as he left, Alex was cornered into a duel with Charles Knowles and defeated him spectacularly using the Silvana's secret weapon. Walker witnessed officially from his casino.

Upon arriving at Horizon Cave, Alex had Tatiana Wisla, Alister Agrew, Claus Valca, and Lavie Head entered into the Horizon Cave Eight. Tatiana and Alister would, at a key power junction, drop explosives that would knock out power for all of the cave at precisely midnight. It would be Alex's job to stall the auction once the Key was brought out by bidding higher and higher bids. Once the power went out, Alex would steal away with the Key from the seller. The plan was almost foiled by Duke Henry Knowles, the father of Charles Knowles, who had brought with him armed guards. Upon learning of his son's death, he went to the auction at Horizon Cave hoping to confront Alex and take him down.

Alex escaped successfully and met with the seller who was in fact Graf, the steward to House Hamilton, the Guild house Alvis was a part of. Alex learned from Graf that the Key was no key at all but set of riddles. These riddles, once spoken to Alvis, would unlock Exile. It was here that Alex learned his first Mysteria. Shortly after leaving Horizon Cave, Alex learned his second Mysterion from Dio Eraclea.

When the Emperor learned that Alex seemed to want Alvis all for himself, he sent Vincent Alzey to confront him about it. The two met at Carmel Lighthouse over warship coffee and when Alex refused to give the Hamilton Mysterion and Alvis up, Vincent challenged Alex to a duel at the Dragon's Fangs. The Silvana and the Urbanus engaged in combat and the Silvana was sunk but was not destroyed.

As ship-wide repairs were underway, Claus Valca met with Alex over the contents of a ten-year-old photograph. The photograph, showing Claus' father, Lavie's father, and the man and woman that Claus had known from young childhood, shocked Claus and he demanded Alex explain himself. Alex revealed that he was the young man in the photograph and that the vanship that Claus and Lavie believed to be their's was in fact Alex's. This conversation led Alex to reveal what his plans for Exile have been all along: its destruction. Alex would learn his third Mysterion from his chief engineer, Recuise Dagobert.

Soon after, Alex attended the coronation of Sophia Forrester to Empress of Anatoray from afar. The Maestro Delphine also came to pay her respects by blanketing the area in rose petals. Alex, upon learning of the Maestro's appearance, went into a frenzy, ordering his bridge officers to fire at will at the Maestro's Guild Presence Ship. Arthur Campbell, the Silvana's Second Officer, belayed the order, stating the captain was not himself. Alex returned to his quarters and, in a fit of rage, trashed the room.

When Sophia came aboard the Silvana after her coronation, she told Alex of her plan to take Exile from the Guild. Alex pointed out where he had seen Exile all those many years ago and the Silvana and the Urbanus began probing the Grand Stream with sonar torpedoes. Not soon after discovering Exile's location, Maestro Delphine and some of her Guild Agents board the Silvana, capturing Alex, Alvis, Claus, Dio, and Lucciola.

Maestro Delphine, now that she knew where Exile slept, tied Alex to a cross with genetically engineered vines. The vines oozed a liquid that, once entering the blood stream of someone who has been pricked by its thorns, acted as a truth serum. Alex would speak all four Mysterion to Alvis and Exile would be in complete control of Delphine. As Alex recited the Mysterion, he stopped on House Bassianus', the Guild house of his fiancée. He had not committed it to memory. In fact, he had sealed it in a letter to Sophia with the other Mysterion. Denying Delphine the chance of controlling Exile, Alex tore his right arm free of the vine and strangled Delphine to death until her neck broke. Seeing the body of his enemy dead at his feet, he muttered the name of his love.

Tortured and exhausted, Alex succeeded in his revenge. As the Guild battle ship crumbled and exploded from the barrage of cannon fire, he spoke his last words: "To the sky."

Alex was buried with a modest gravestone on the top of a cliff at a graveyard in Anatoray. His relentlessness to topple the Guild led to the eventual activation of Exile and the journey back to Earth became possible. Although he had wished to destroy Exile to ruin Delphine's plans and destroy the Guild's hope of ever dominating Prester, her death was equally as important to him. With Delphine gone, the Guild dissolved and merged with the people of Anatoray and Disith, who had likewise dissolved after joining the Alliance. 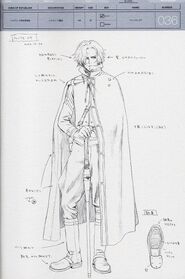 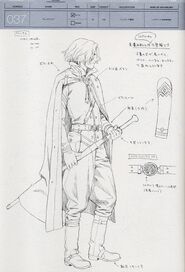 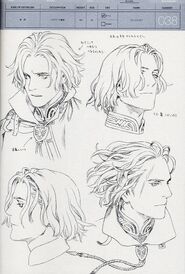 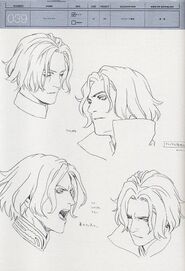 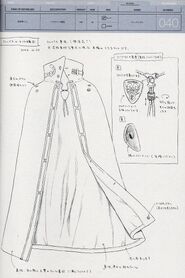 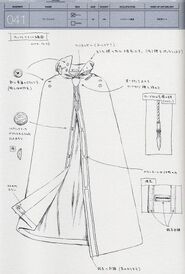 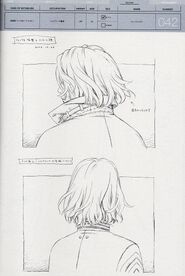 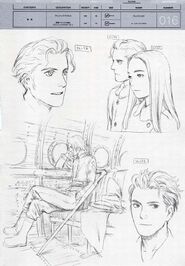 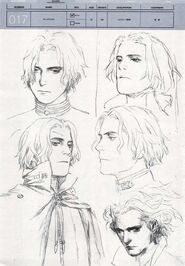 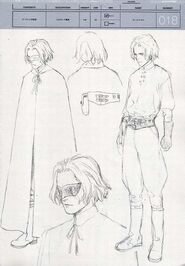 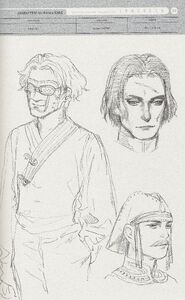 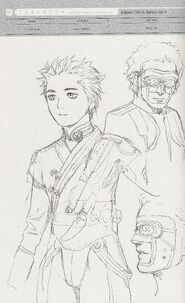 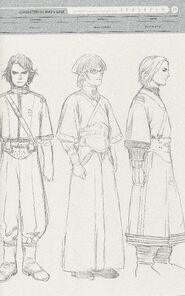 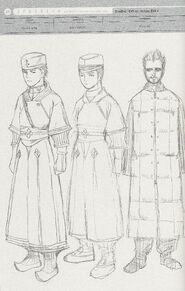 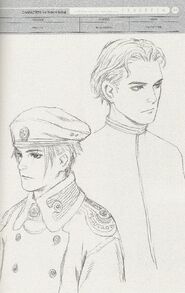