Georges Head was the father of Lavie Head.

His wife died in childbirth, leaving him to raise Lavie as a single parent. When the Valca family moved next door, he immediately became good friends with Hamilcar Valca and served as the famous vanship pilot's navi. Head died at the age of thirty-five while attempting to cross the Grand Stream to deliver a peace treaty to Disith, orphaning Lavie at the age of five.

Lavie later finds his remains inside Exile, along with the peace treaty he failed to deliver. 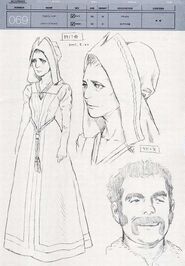