Edit
watch 01:36
We're Getting Mutants in the MCU - The Loop
Do you like this video?
Play Sound

Along with Fam, she went with her whole family in Grand Race, and it was later revealed in Backward Pawn that her father, Atamora has won 1st place in the said contest. But the Grand Race ended due to the Empress of Ades dying. But it seems that GiGi doesn't remember that much about it.

Fam Fan Fan's best friend. Contrasting with the reckless Fam, she is introverted. Being the eldest daughter of the Sky Pirate's chief, Atamora Collette, Giselle can easily handle housework such as cooking and cleaning while taking care of her brothers and sisters. She's called "GiGi" by Fam Fan Fan in the anime.

Giselle fills the role of the navigator in the vanship's backseat. Giselle collects and stores various battleship- and military-related data, and covers for Fam in those aspects. 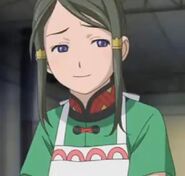 Giselle in her home outfit.