Last Exile
Register
Don't have an account?
Sign In
Advertisement
in: People of the Guild, People of Anatoray, Last Exile Characters

"So how does it feel to be appraised with a value of fifty billion Claudia?"
"Not bad at all."
―Alexander Row and Graf[src]

Graf is the steward to Guild house Hamilton.

In Guild Date 653, he fled from the Guild to Anatoray with Gita Rjuna and the granddaughter of Maestro James Hamilton, Alvis E. Hamilton. He was entrusted with the Hamilton Mysteria. As Delphine Eraclea's control of the Guild began to grow and eclipse Maestro James', the safety of the baby became the ultimate priority for House Hamilton.

Graf would reappear in Guild Date 664 at Horizon Cave. He attended an auction of various artifacts and the supposed Key to Exile (which he himself had listed). The "key" was not a material object at all, but the first question in a series of riddles called the Mysteria. After the Silvana crew's successful sabotage of Horizon Cave's power supply, Graf met up with Alexander Row at a fountain and gave Alex the Hamilton Mysterion. For his help, Graf was paid a large chunk for Claudia. 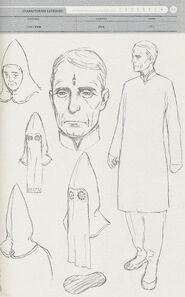