Hamilcar Valca was a famous vanship pilot. Although he came from nobility, he moved to Norkia with his wife Justina Valca out of love for the frontier town's free skies. He became immediate friends with Georges Head, who became his navi. The two were also good friends with their fellow vanship pilot Alexander Row and his navi Euris Bassianus. Unfortunately, Hamilcar, Georges, and Euris all died in the attempt to deliver a peace offer to Disith when Exile's defense system reacted to their presence in the Grand Stream. Valca died at the age of thirty-four and when Claus was five years old.

Hamilcar's name comes from the historical figure Hamilcar Barcas, Carthaginian general during the First Punic War and father of the famous tactician Hannibal. 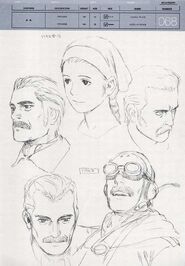