Last Exile
Register
Don't have an account?
Sign In
Advertisement
in: Fam, The Silver Wing Characters, People of Turan, Deceased

"You have no qualms?"

"Not at this point. My hands are already bloodstained."

-Luscinia Hāfez and Liliana about summoning an Exile.

Liliana il Graziosco Merlo Turan is a princess of the Kingdom of Turan, the eldest daughter of the ruler King Turan.

Liliana's appearance is different throughout the series. She has rich straw-blond hair reaching her waist. She usually ties part of her hair with a gold clip and wears it in a braid letting the rest of her hair down. But she leaves it entirely open later in the series. The front strands of her hair is attached with a pair of small golden wing like hair clips joined by a thread with a piece of emerald green jewel. The thread runs across her forehead from the first clip to the second one leaving the jewel at the middle of her forehead. Liliana like most other characters in the series has ocean blue eyes. She is often seen wearing a pair of golden earrings and light lipstick. Her very first appearance showed her wearing a plain white frock with a long tail. The dress revealed much of her back and front. Later at the battle between Turan and Ades Federation she was seen wearing a bluish black hat with green pyramid patterns on the lining and a pair of white ribbon to tie it across the chin. She was seen wearing a long white skirt with a decorative lining and a turquoise cloak with a bluish-black woolen shoulder which resemble a shawl and a pair of gloves with the same color as her hat. During her captivity, she was wearing a white gown and a jacket with frilly short sleeve. After her reappearance, Liliana changed her usual color white and blue into pitch black. She began to wear a black gown with blue patterns in the middle and lining and a short black cloak with blue lining. She occasionally wears a crown like black hat with woolen decor on the sides and a transparent black veil that cover her hair and part of her face.

Compared to the determined Millia il Velch Cutrettola Turan, Liliana is a gracefully quiet woman. As a stand-in for her bedridden father, she is highly skilled in politics and she is essentially responsible for the governing of Turan. When she was young, Liliana was quite strict and determined much like Millia as seen when she scolded Millia for running off on her own and opposing her father for pampering her too much. She was also very determined to work hard to become a good ruler as seen when she was inspired by the Augusta's actions as a ruler during the Grand Race. It appears that Liliana is very patient and skilled at controlling her emotions. She put on a false facade of being evil and even stripped Millia of her title in order to protect her and the world. Her ruthless actions were enough to fool even Millia until she revealed her true intentions. It appears that Liliana is a very caring sister. In order to protect Millia who she greatly cherishes and the world she sacrificed herself. Even before her death she requested for Millia's protection with her final breath.

Liliana is the Key to one of the Exiles which orbit Earth. As such, she's captured by Luscinia, who activates her as a key, causing the Kingdom of Turan Exile to become active and descend to Earth. When the Turan military panics and opens fire on it, Exile defends itself, effectively destroying the country of Turan.

Later, Liliana returns just as her younger sister Millia has managed to gain the support of the Sky Pirates and Anatoray-Disith. She immediately takes control of the captured Ades Federation battleships given to Millia and the surviving Turan military by crowning herself the Queen of Turan. Liliana announces that there is peace between Turan and Ades, whereby Turan should submit to Ades rule for that peace. When Millia objects and does not join Liliana, Liliana disowns her, strips her of her title, and orders her new fleet to attack the Silvius, where Millia has sanctuary. Despite some uncertainty among the Turan troops, they do as Liliana orders. In the meeting where Vasant rebelled against Luscinia Liliana sided with him saying his cause was just and he had Turan's full support. As Millia objected to this Liliana began an argument with Millia whether or not her actions are right. Later that evening, Liliana asked Luscinia to bring Millia to her. When she arrived, Liliana apologized while hearing Millia's accusations and complains. She then explains her reasons for sacrificing her kingdom and her family for the sake of the world. Finally, she entrusted the role of the Turan princess to Millia bringing her to tears.

In "Transposition" Liliana took the bullet from Dyan to protect Luscinia which resulted in her death in the supposed signing of peace treaty between the Ades federation and the Allied nations. Before her death she requested Luscinia to look after her sister Millia.

Liliana at the Grand Lake

Liliana in the battlefield

Liliana as the key to Exile 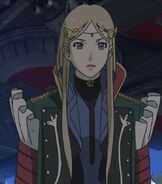