Mullin has a soft spot for pretty girls, but is definitely not a player. Honest to the point of bluntness, he blurts out his feelings for Tatiana and later for Dunya.

According to the Last Exile's artbooks, Mullin is 170cm tall, he has messy short brown hair and grey eyes. At the end, he has incipient facial hair.

He previously served on the Brionac and the Ulster. At the time of his introduction, he is fighting at the Third Battle of Minagith and has three survival medals, proof he survived three battles. He needs two more to be promoted off the rifleman line. [1][2]

He reappears aboard the Walker Palace when Silvana docks for repairs and flirts with Lavie after reacquainting with her, admitting he was thinking of joining Charles Knowles crew of the Goliath since it had never been damaged in battle before. After being dismissed by Knowles because he was a rifleman, he mourned that he only needed one more survival medal to be transferred off the rifleman line, thinking then he would get some respect.

He gambled on the gold racing bird, and lightly teased Lavie after she chose the right one that appeared to be sleeping. Knowles also chose the gold bird. The white bird came from behind and was about to win when Mullin saw Knowles signal one of his men with a camera, who snapped a shot on the track, the flash stunning the white bird so the gold could win. When Lavie accused Knowles of cheating and the Silvana crew took advantage of the situation to start a brawl with Goliaths crew, Mullin slugged Knowles and accused him of being a dirty cheater. Mullin revealed that during the Third Battle of Minagith, Goliath was the only ship who ran without putting up a fight. Knowles draws his sword to cut down Mullin, only for the director of the floating palace to shoot the sword and break the blade off before it can harm him. After Silvana defeats Goliath with one salvo he was given an impromptu survival medal by Lavie, who said he earned it as he had enough good sense not to join Goliath. ("Takeback")

After events aboard Walker Palace, Alexander Row allows him to join Silvanas crew. He attempts to help Lavie and Claus repair their vanship, stating that despite being a musketeer he's quite a knowledgeable mechanic. Upon hearing this, Silvana's engineering crew decide to have some fun with him and abduct him from the vanship to "induct" him into the mechanic squad (strip him of his clothes). Lavie teasingly congratulates him on finding a new job. He and the other mechanics help Claus and Lavie repair a vanship for the Horizon Cave Eight Race Vanship. ("Calculate Alex")

He was also a Silvana mechanic, but later returned to the battles. Later on he has a good relationship with Dunya Scheer from Disith, and it seems that they fall in love with each other, when Mullin asks her to go on the same ship together. Shetland appears to die at the end of the series after being shot while attempting to stop the Guild, but the final scene shows him alive and living together with Dunya and her younger siblings.

Dunya is the final girl that Mullin falls for and the only one who returns his feelings. In the last scene he is seen living on a farm with Dunya and her younger siblings. The little girl has inherited the Stuffed goat. 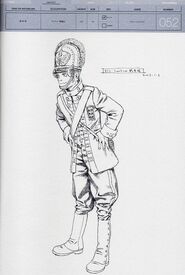 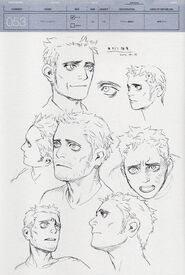 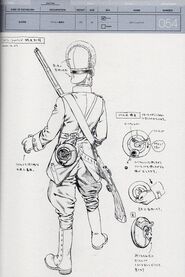