Nestor is the commander of the Disith fleet invading Anatoray. He is unable to open his right hand due to damage suffered in a blizzard. After Sophia Forrester ascends to the throne of Anatoray, she extends an offer of peace to him, which he accepts. He allows Sophia to be in overall command of the Alliance, and provides her with a map of the Grand Stream and a recording of Exile's acoustic signature.

The name Nestor comes from Nestor of Gerenia, the son of Neleus and Chloris and the King of Pylos. Messina is a city in Sicily originally named Messene after Messenian Greeks. 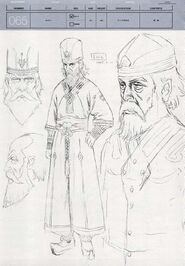