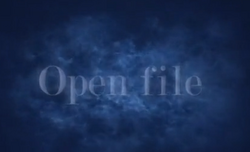 A group of Sky Pirates led by Fam Fan Fan and Giselle Collette capture a large vessel (a Federal Old Battle Ship captained by Ernest Cirrus Lindemann), which they refer to as a Skyfish. As the operation concludes, Dio Eraclea spots the Anatoray-Disith Exile descending through the atmosphere.

In Grand Lake, Princess Liliana performs a prayer ceremony in preparation for the upcoming peace accord between the kingdom of Turan and the aggressively expansionist Ades Federation. The location was chosen because even Ades regards Grand Lake as sacred and it is believed they would not attack it.

Fam and Giselle return to the Sky Pirates' base at Kartoffel. They read an article about the peace conference in a newspaper, then spot a giant Ades fleet flying towards Grand Lake. The pirates decide to intervene.

At Grand Lake, the Turan flagship Lasas comes under attack from the Ades fleet. Kayvān instructs that the two princesses be taken alive and the rest of the Turan forces killed. The Sky Pirates arrive and Fam declares her intention to steal the Lasas. The Sky Pirates drop smoke, obscuring the vision of the Ades ships, then send false signal flares to trick them into firing on each other. At the same time, Dio boards the Lasas and takes the helm. By turning the ship upside-down and detonating smoke bombs and depth charges, he makes it appear as though the ship self-destructed and crashed into the lake.

Luscinia Hāfez receives Kayvān's report of the battle, but doesn't believe it. He dispatches his servant Alauda to confirm it. Meanwhile, the Ades fleet continues towards the capital city of Iglasia, and Liliana orders the Turan fleet to intercept them.

Fam Fan Fan and Giselle Collette are Air and Sky Pirates who ride smaller vanships called Vespas with which they capture battleships with other Sky pirates led by Giselle’s father, Atamora, with Dio also a member as well. Meanwhile at the Grand Lake, the Princesses of the Kingdom of Turan, Liliana il Grazioso Merlo Turan and her younger sister, Millia il Velch Cutrettola Turan, are preparing for a peace treaty with the powerful Ades Federation led by Premier Luscinia Hāfez, Liliana’s childhood friend. However, the peace treaty is a ruse to capture the princesses while the larger Ades fleet attacks the unprepared Turan fleet. The Sky Pirates learn of the attack and head to the Grand Lake. Fam offers to rescue the Princesses in exchange for surrendering the flagship Lasas to them, which Liliana agrees to, much to Millia’s shock. Thanks to Fam and the Sky Pirates, the Ades fleet is tricked into shooting each other due to smokescreens and faked light signals, and the fleet is fooled into believing the Lasas has sunk. Now under the safety of the Sky Pirates, Liliana orders to head back to the Turin capital Iglasia to prepare for Luscinia’s next attack.

Community content is available under CC-BY-SA unless otherwise noted.