The Urbanus-class destroyer is a state-of-the-art battleship designed and built by Prime Minister Marius Bassianus.

Shortly after the construction of the Silvana at Prime Minister Marius' private shipyards, he and the escaped Guild members began designing another advanced destroyer. Having used the Claudia Unit from Marius' personal ship in the construction of the Silvana, the engineers needed to find a new way to make their new creation fly, as it would be impossible to acquire new Units from the Guild.

The engineers created a brand-new Claudia-powered propulsion system, based on the independent propulsion engines of the vanships. The new ship would utilize dual engines, one type to generate lift and another for propulsion and maneuvering, just as the vanships use, albeit scaled far up.

The Urbanus-class was built from the ground up to be able to match up with the current ships of the line. It has an interesting combination of short- and long-range weaponry. The design of the ship makes it quite fast and maneuverable, able to out-flank an enemy vessel, softening it up with its long-range weaponry and eventually moving in with several point-blank assault weapons to take it down for good.

Six ships of this class have been produced thus far: the Urbanus, the Martinus, the Georgius, the Sebastianus, the Julianus, and the Eustatius. Just like the Silvana, their captains were assigned by Prime Minister Marius. However, unlike their predecessor prototype, control over these vessels was tightly maintained by the emperor, much to the chagrin of Marius, who felt that the emperor no longer cared about his own people.

Just like the vanships from which much of its design features were taken, the Urbanus-class destroyer features a solid, smooth, boat-like hull. Its prow is dominated by a large ramming horn. The sides slope back neatly on its primary hull. Resting beneath this is the secondary hull, which contains the lift Claudia Unit. Extending behind the primary hull is a single thrust vector Claudia Unit, looking exactly like a enormous version of a vanship's main engine. Below the secondary hull is the main rudder, similar in design to the Silvana's rudder. All of these components are mounted to a giant framework. Extending from the sides of this framework are a pair of "wings" onto which are installed the close-quarter cutters, the most devastating close-range weapon the Urbanus-class possesses.

Like the vanships that preceded its design, the Urbanus-class has two independent engine systems. The first of these is the "lift" Claudia Unit, which is housed in the secondary hull lying below the center line of the vessel. It is used exclusively to allow the ship to levitate, even though its design would also allow propulsion as well. This gives the Urbanus-class output to spare. Its rear engine - the "thrust" Claudia Unit - is identical to a vanship Claudia core and thrust vector vane, albeit far larger. Like the engines on a vanship, the Claudia Units onboard the Urbanus-class are powered by steam, evidenced by the four, enormous smokestacks extending from the rear of the ship.

A new system developed specifically for the Urbanus-class is the silent propulsion system, a mechanism by which the sound generated by a Claudia Unit is muffled. As sonar is used for most sensor contact in ship-to-ship battles, this gives the destroyer a noticeable advantage over other vessels. Even when inside cloud, where the sound should be able to transmit more fluidly, it is difficult for an untrained listening officer to even determine the correct bearing and range to an Urbanus-class destroyer, if he can tell it is there at all.

The weapon systems aboard the Urbanus-class destroyer are as radical as the rest of her design. The Silvana, for all her advanced technology, still employs the standard Anatoray naval strategy of bringing superior fire to bear on an enemy. The Urbanus-class, however, utilizes a multi-stage weapon array consisting of short-, long-, and close-quarters weaponry, the latter of which being entirely new to naval warfare.

The destroyer's primary weapons consist of two anti-ship torpedo launchers. This weapon is a scaled up version of the jet-propelled shells utilized by the Silvana. They utilize small Claudia engines to maintain lift. Instead of being simply armor piercing, these torpedoes also carry variable-yield warheads. The main launcher is a fixed-forward tube. The secondary launcher is mounted on a turret atop the vessel, and has four racks to which torpedoes can be mounted. Given its power, a single torpedo is capable of sinking a line ship. This makes it an excellent standoff weapon that no existing ship can match.

The short-range weaponry is two trios of small turrets. Compared to line vessels and even the Silvana, these turrets do little to close the gap in terms of firepower. However, that is not their purpose. They are used to soften a fleet's defenses as the ship moves in to use its close-quarters weaponry. The cannons retract behind armor plates in order to not interfere with the first close-quarters weapon, the ramming horn.

The close-quarters weaponry, a new concept in naval warfare, involves having the destroyer make actual, physical contact with another ship. This is unheard of in naval combat, which is why it was determined to be a worthwhile capability to pursue. The first of these is the ramming horn which dominates the prow of the vessel. This reinforced horn is capable of ramming into and puncturing deep into the enemy hull. As the destroyer is capable of outmaneuvering most vessels, its second close-quarters weapon, the cutters, can also be devastating. These two wings are essentially over-sized chainsaws, able to literally saw through an opponent's hull.

The Urbanus-class also returns to the practice of using musketeers. This fits well with their close-quarters battle doctrine.

By using these three weapon types in sequence, an Urbanus-class destroyer can stand off from an enemy ship, taking out choice targets with carefully-placed torpedo shots. Moving in close, softening their defenses with their turrets, they out-maneuver an opponent until close enough to use the ramming horn or cutters to literally tear a ship apart. One method of using the cutters is to dig into the ship on a slow pass, allowing the musket squads to fire directly into the hull as they pass. 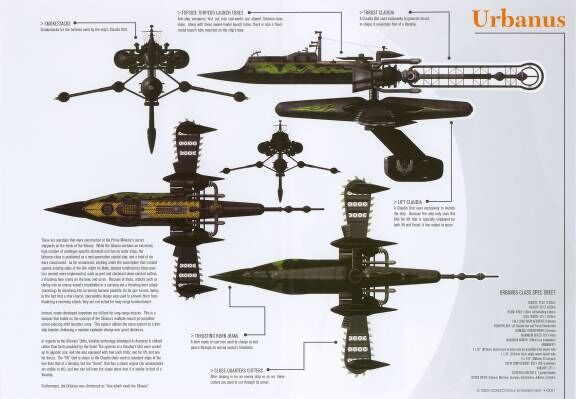