Vincent Alzey is a naval officer of Anatoray and a friend of Alexander Row and Sophia Forrester.

Initially appointed Admiral of Anatoray's fleet and captain of the Urbanus, he was relieved of his command after Alex sank four out of five of his Urbanus class ships. Despite this, he respects Alex, knowing his strengths in combat and strategy (they were in the Officers' Academy together; indeed, before the battle, Vincent met Alex to try to persuade him to keep the Silvana out of battles). A great lover of coffee, Vincent likes to enjoy life. But when duty calls, he's not about to sit back either. When Sophia was imprisoned by her father and about to be killed by a guard, he barges into her room and saves her. Some of his dialogue also hints at a romantic interest in Sophia, despite her obvious affections for Alex. With her command as Empress, Vincent resumed his command as Admiral and captain of the Urbanus, this time leading Alliance ships into a grand battle against the Guild.

Vincent Alzey returns in Fam as the Commander-in-Chief of the Vanguard Unit of the United Kingdom of Anatoray-Disith. He is in charge of the government of the kingdom on Earth while its main force is to be transported on the Anatorian Exile from Prester.

Vincent first appears in Fam as a gatecrasher on Fam's birthday party aboard Silvius. He later escapes from the Grand Lake aboard Urbanus when Liliana takes charge of the captured Turan fleet and attacks Silvius.

In "Triangulation", it is shown that he retreated back to Anatoray after this attack and is now guarding its wheat fields. 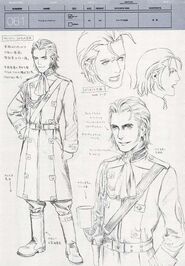