Wina Lightning is a second lieutenant and chief acoustician and is a bridge officer aboard the Silvana.

She wanted to be a musician but was forced to join the army because of financial problems. Her exceptional sense of hearing has made her the "secret weapon" of the Silvana, and allows her to hear many things that others are not capable of hearing. She trains herself by continuously listening to the different acoustic signatures present in the Grand Stream, from the sound of a rainbird flock to the signature of a Disith battleship's remains. When the Silvana enters the Grand Stream, she is tasked with locating Exile by the sound of its engines.

When the flagship of Delphine Eraclea is destroyed during battle over the Gateway, Wina is able to hear the last words of Alex Row. She lies to Sophia about them, saying that he said "Sophia" instead of "Euris". 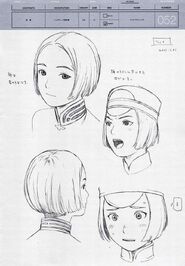